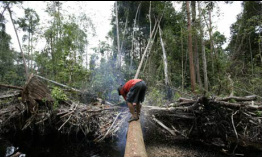 In the early 1900s palm oil was one of the biggest exports for the West African countries from where it originates.  It’s widely used in foods and a whole range of products.  It’s an incredibly versatile oil and demand outstripped supply, so production moved elsewhere.

Huge plantations sprang up in South East Asia producing cheaper palm oil in bigger quantities. The consequence is impoverishment of the West African farmers and devastation of the Malaysian and Indonesian rainforests.
According to the United Nations, 98% of Indonesia’s rainforests could be destroyed by 2022 if the destruction continues at the same rate.
The effect on the environment is catastrophic.
Peatland is one of the most concentrated stores of carbon around. Clearing the forest on top, draining the peat and burning it releases vast amounts of greenhouse gases into the atmosphere.

Outrage mostly focuses on the orangutans threatened with extinction but other animals - notably the Sumatran tiger - are also endangered.
Moreover, the palm oil industry is also linked to major human rights violations.
With plantations systematically destroying the rainforest land that the local people depend on, communities are continuously finding themselves with no choice but to become plantation workers. Faced with poor and degrading working conditions, they often earn barely enough income to survive and support their families. Child labour with its concomitant abuses is rife.
How can we avoid contributing to this carnage? It is suggested that we look for the RSPO label which is meant to indicate that the palm is sustainably sourced but Greenpeace have stated: “many RSPO members are taking no steps to avoid the worst practices associated with the industry, such as large-scale forest clearance and taking land from local people without their consent. On top of this, the RSPO actually risks creating the illusion of sustainable palm oil, justifying the expansion of the palm oil industry.”

A new range of cleaning products has been launched under the  brand name Clean & Fair.
Fairtrade producers have begun to work with Ghanaian farmers and processors to produce Fairtrade palm oil in a way that protects the environment.
The palm oil is combined with fairtrade coconut oil from India to make laundry liquid, washing-up liquid, surface cleaner, handwash and soap.
The products are effective, eco-friendly and biodegradable. If you choose to buy from the Clean & Fair range you will not only be avoiding contributing to the environmental catastophe but you will be making a big difference to the lives of small scale African farmers and processors.  Fairtrade is all about giving a hand up rather than a hand out to some of the least privileged people around the world.

You can order Clean & Fair Products online at the traidcraft shop.

ps.  and don't forget that Divine,  top scoring for ethical chocolate, uses NO palm oil in its chocolate.

pps.   The ethical consumer and the Rainforest Foundation have published a helpful ﻿guide to a number of common consumer products﻿.