Fairtrade Fortnight over the years in Tatsfield

The team for Fairtrade Fortnight 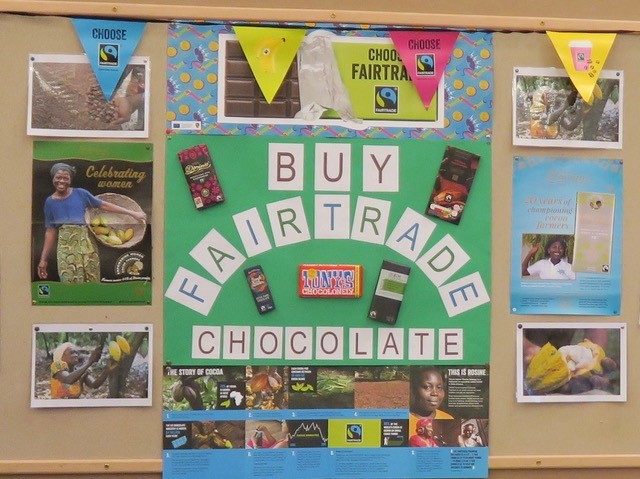 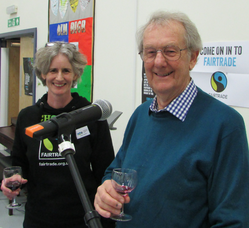 Around 80 people, including SCC leader David Hodge and his wife Anne, attended the rescheduled Fairtrade Wine tasting evening, which was held in the School Hall on Saturday 7 April.
Roger Pearce presented six wines, from South Africa, Argentina and Chile which all have Fairtrade accreditation. Roger gave a brief history of winegrowing in these countries before the tasting began, while Hilary Harber talked about the Schools and the Clean Water that the Fairtrade Premium provides.
Of particular interest was The Running Duck Brand, which is made by Stellar Organics – a pioneer winery from Western South Africa. The wines are certified organic and have also been made according to “Fair for Life” guidelines. This social and fair trade certification ensures that human rights are guaranteed at any stage of production, that workers enjoy good and fair working conditions and that smallholder farmers receive a fair price. The brand is named after the Indian Runner ducks sent roaming into the vineyards to eat snails and other threats to the vines. This is natural pest control and allows the winery not to use pesticides and other harmful chemicals. It is also sulphite free.

However, the favourite wine of the evening proved to be the Sainsbury’s Taste the Difference Morador Malbec.
Roger’s final thought for the evening: It doesn’t matter if the glass is half empty or half full – there is clearly room for more wine. Clearly Tatsfield agrees.
Fairtrade Fortnight 2017

The Mirror ran an article "What is Fairtrade fortnight?
5 great reasons why you should start buying fairtrade products"
NOW MORE THAN EVER
it's time put Fairtrade in your break 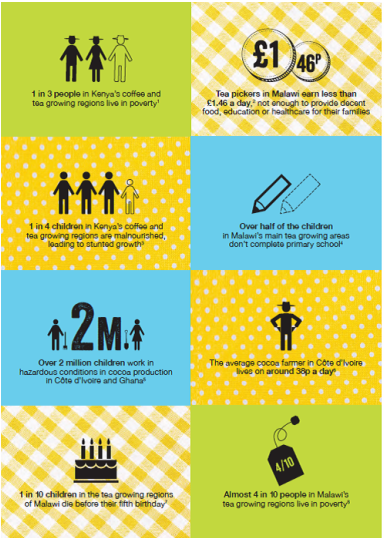 ​In February 2016 we sat down together to enjoy a Fairtrade breakfast - in the Village Hall, in the Bakery and in our own homes.

‘Before you finish eating your breakfast in the morning, you’ve depended on more than half the world’
Martin Luther King Jr (from a Christmas sermon on peace 1967)
So let’s sit down for a Fairtrade breakfast every morning and stand up for farmers!
Maybe this morning you enjoyed:
Coffee from Kenya
Bananas from Columbia
Cocoa from Cote d’Ivoire
Tea from India
Sugar from Malawi
Juice from Brazilian oranges
Muesli from round the world
not forgetting British milk
Let's hope they were all Fairtrade!

We saw how the co-operative functions and the benefits that are enjoyed by the community as a result of Fairtrade, giving us a glimpse into their lives. This co-operative has used the Fairtrade Premium to purchase motorbikes to reach more farmers and train them in better farming practices. They have brought a life saving ambulance, invested in building a bridge making transporting the tea crop more efficient and trading easier and are planning to build a school which will be tenminutes walk from the village rather that the current hour.

This evening was also an occasion to highlight the disastrous flooding that occurred earlier this year, and since the film was made, which has affected hundreds of thousands of people including the death of sixpeople from this co-operative.

A special raffle was organised and thanks to people’s generosity raised a wonderful £350 to go to the Malawi relief fund.

The Chair of Tandridge Council, Elizabeth Parker, expressed her pleasure at the number of people who were present and her thanks for being invited.
We learned how co-operatives are formed and how new members join, where there is the opportunity for them to work.
There was a happy buzz of conversation as everyone ate their tea or browsed and shopped from Moyna Bridge’swide selection of Fairtrade goods, food, clothing and presents.

It is lovely to see how many people in Tatsfield support Fairtrade.

This free event was sponsored by Tatsfield Parish Council.

2014's campaign focused on making bananas fair! To help understand the effect that the unfair banana has on the growers Alberto Alfonso ‘Foncho’ Cantillo, a 43 year old banana farmer from Columbia visited the UK in Fairtrade Fortnight. He is a man with a plan! He works hard, putting in long hours to make his business work. His livelihood depends on bananas. He knows that without them he would struggle to find another job to provide for his family. He is fuming that the majority of the bananas munched in the UK are sold so cheaply that his fellow growers often do not earn enough from what they sell here in the UK.

What would the ultimate Fair Banana could look like?

A fair banana would be produced in a socially, economically and environmentally sustainable way and consumers would have a guarantee that this applies across the supply chain.

So there would be independent verification that bananas are farmers are produced by farmers and workers who for example:


What happened in Tatsfield during fairtrade fortnight 2014?

Working with Tatsfield School
There was a Fairtrade day at Tatsfield School when, through  a  range  of  activities organised  throughout  the school children, we worked to raise the children’s awareness of Fairtrade and its role in ensuring a fair price and sustainability for farmers and workers in the developing world. Children and parents had an opportunity to see and buy from a wide selection of Fairtrade goods too. This was supported by members of the Tatsfield Fairtrade Village Group and pupils from Oxted School.
Cecily Bateman, one of these pupils has written a report of the event Click to read it.
Beavers
We also visited Tatsfield Beavers, who made Fairtrade fruit salad and, having tasted the results, two helpings in some cases, they voted Fairtrade pineapple their favourite Fairtrade fruit. Look out for the Fairtrade version when you go shopping!
​
​Fairtrade Fortnight in 2013

​As usual we focussed on Fairtrade goods in our two village shops. There are a growing number of Fairtrade items in Linda’s and in Di and Tony’s Greengocery. Fairtade fruit was on sale as well as the Fairtrade Zaytoun olive oil from Palestine which quickly sold out after people had hear the talk on the evening (more in stock now!)

During this fortnight an assembly at Tatsfield school focused on Fairtrade. The children collected a huge number of Fairtrade wrappers  to be used in building Tatsfield Fairtrade Tower! The snow intervened at a crucial moment and the project had to be deferred but the children are still eager and ready to go.

PALESTINIAN FAIRTRADE OLIVE OIL FLOWING AT VILLAGE HALL
Around 80 people gathered on Sunday 3rd March to hear about and try Zaytoun extra virgin olive oil, which is the first olive oil to achieve Fairtrade status. The evening was enthusiastically kicked off by Jennie South and Hilary Harber of the Tatsfield Fairtrade Village Group. Sakina Bradbury, Chairman of Tandridge District Council, congratulated the group and explained why she is keen to spread the Fairtrade message. There followed an illustrated talk by Taysir Arbasi, a farmer who lives in Salfeet District, and Atif Choudhury, Zaytoun’s UK Director. Taysir explained the obstacles that have had to be overcome and which continue, includ- ing the competition for land, the dispersal of the population and the deliberate destruction of olive trees in some places. There is huge demand for scarce water resources, which are also needed by the expanding Jewish settlements; and the bottles for the oil have to be manufactured elsewhere. To enter the European market, Zaytoun oil had to meet EU standards and compete with established Greek, Spanish and Italian brands. Now 25 villages and thousands of people are involved and new trees are being planted. A Soil Association Award has been achieved for its organic status.
Hilary’s husband Andrew made delicious bread and Bob David made a dip which was admirably accompanied by the olives, oil and herbs. Dimitri Araj, a member of Tatsfield Badminton Club,  comes  from  Palestine  and  has  family  living  there, generously donated a number of attractive items made in Palestine for a raffle.

Fairtrade is a strategy for poverty alleviation and sustainable development. Its purpose is to create opportunities for producers and workers who have been economically disadvantaged or marginal- ised by the conventional trading system. If fair access to markets under better trade conditions would help them to overcome barriers to development, they can join Fairtrade. Fundamentally, it ensures disadvantaged farmers and workers in developing countries get a better deal.

And those living on the occupied west bank of the Jordan River around Jerusalem are particularly disadvantaged. Over many years, we have become familiar with images of conflict from here. Palestinians on the west bank live in village communities  and  rely  on  agriculture,  particularly  the  production  of  olive  oil. 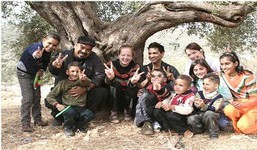 Palestinian children under an olive tree
Zaytoun’s organic Fairtrade olive oil is pressed from the fruit of ancient trees which have been tended by hand through generations of family farmers. It is produced by farming co-operatives within the Palestinian Fairtrade Association, who harvest their trees by hand every October and send the olives to village presses within 24 hours. Many of the trees are over 1000 years old; they can grow for 3000 years.

Until recently, very little of this oil, which has a light and delicate flavour, has reached consumers outside Palestine. Due to restrictions on trade, it still cannot be exported to Gaza or Jordan. Now oil and other Fairtrade products including dates, almonds, soap, couscous and traditional Palestine ‘Za’atar’ herbs are available in the UK.
This quote from Mahmoud Issa, an olive farmer from the Palestine Fair Trade Producers Company, says all that needs to be said: "The zaytoun, the olive, means everything to us. My father and my grandfather farmed on this land, and now my children work alongside me harvesting. Our olive oil is of the highest quality because of the fertility of the land and we use traditional farming methods. Fairtrade will bring stability to our farmers with the Fairtrade premium allowing for investment. In the past, we were often forced to sell our products at a loss due to the economic situation, but we are hoping that Fairtrade will help re-establish small farmers’ faith in the sustainability of the agricultural sector in Palestine."