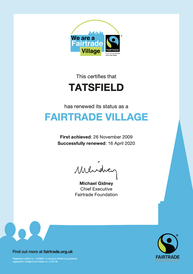 In order to do so we have to continue to meet the following goals:
​
Goal 1: Local council passes a resolution supporting fairtrade and agrees to serve fairtrade products at its meetings.
Goal 2:  A range of goods is available in local shops and catering establishments.
Goal 3: Fairtrade products are used by a number of local work places and community organisations.
Goal 4:  There is media coverage and popular support for the campaign
Goal 5:  A local Fairtrade steering group is convened to ensure continued commitment  to  its Fairtrade  status

Tatsfield Fairtrade Group were really pleased to be invited to support the Bec Cycling Club Hill Climb on White Lane on Sunday, 13th October 2019.  It was a wet and blustery day, so the conditions were extra tough for the 120 cyclists who challenged themselves to race up the steep, slippery hill in as short a time as possible.  We set up our gazebo at the top of the lane and offered free Fairtrade bananas to all the competitors to provide energy before the 2-minute race or to help replace much needed nutrients.

Our inflatable banana and banner got the message across - “Let’s end the cycle of poverty with Fairtrade”.  However, the star attraction had to be the famous yellow banana costume! Together we handed out 150 bananas and enjoyed talking to cyclists and their supporters of all ages.  It was suggested that we could become a permanent fixture at the event run by the club which formed back in 1924 - Banana Corner has a certain ring to it!
2019 TATSFIELD WI SUMMER GARDEN PARTY
Tatsfield WI took "Fairtrade" as its theme for it's 2019 Garden Party. The challenge was to decorate a hat accordingly. The support of the WI for Fairtrade is particularly appropriate because in 1992 the National Federation of WIs was one of the six founding organisations of the Fairtrade Foundation.
The imagination and variety of the decorations were impressive. Here are just a few, There are more pictures on our facebook page.

A bag of Rice can change a Life!

In 2019 we marked the 10th anniversary of Tatsfield becoming a Fairtrade Village.  Throughout the year, the Village celebrated in many ways, including taking part in the 90kg Rice challenge.

Deciding  to do something special to mark the occasion, the Fairtrade Group together with St Mary’s Church and Tatsfield School took up the challenge of selling 90kg of Kilombero Rice which amazing provides enough money for a child in Malawi to go to secondary school for a whole year.  Sales were so good that within a month a further 90kg was ordered and that too was sold throughout the year.

Kilombero Rice is the UK’s Most Ethical Rice.
The fairly traded rice grain is hand sown in the rich alluvial soils of Northern Malawi and that coupled with environmentally friendly traditional harvesting methods ensures a superior, aromatic rice that is good for you and better for the planet.  The rice has won the Great Taste award and is the most ethical rice on the market according to Ethical Consumer magazine.  Kilombero Rice is one of the products distributed by Just Trading Scotland.  For more information and to order click here.

The Fairtrade Premium is used to help fund projects like free eye care and subsidised glasses, free diabetes checks, free school books and backpacks for workers’ children and free transport to work. The Premium also part funds larger scale projects such as water purification plants located just outside the factory gates so that anyone in the community can take advantage of the free, safe drinking water on offer.

This means that Surrey now meets all the criteria to become apply for Fairtrade County status except that it needs one or more “flagship employer”. That is a firm or organisation in Surrey which is a significant employer and a supporter of Fairtrade, encouraging and promoting Fairtrade with its staff and customers. If you work in such a company do get in touch at www.surreyfairtrade.org.uk.

Here’s the wording of the resolution:

This Council welcomes the initiatives by towns and local authorities across Surrey to encourage the use of fair trade goods by achieving Fairtrade status.

Furthermore this Council believes that Surrey County Council, as an important consumer and opinion leader, should research, develop and support a strategy to facilitate fair trade wherever appropriate.

To encourage the use of fair trade goods, for example products carrying the Fairtrade Mark and products in vending machines

To concentrate on making Council employees, the Surrey public and local businesses aware of the Council’s resolution on fair trade.

Fairtrade village status renewal
Fairtrade status was achieved in 2009. However, this is not a one off achievement - it is an ongoing commitment  and a renewal application has to be made every two years. It was successfully renewed in 2011 and we have heard from the Fairtrade Foundation that we have been successful in renewing it again in 2013. 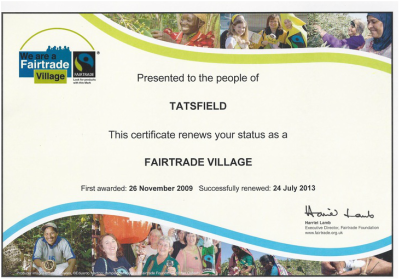 Children at Tatsfield School built a Fairtrade Tower
covered with Fairtrade wrappers they had collected
So the steering group carry on committed to promoting Fairtrade knowing that in doing so we are encouraging everyone to make a choice when they do their shopping which really does make a positive difference to farmers and producers in the developing world.

Congratulations to all the pupils who have supported the fairtrade movement
and congratulations to Hilary Harber of the Tatsfield Fairtrade Village Steering Group
who has worked so hard for this achievement.

Hilary writes:
For the last couple of years or so I have been working with colleagues and students at our local secondary school, Oxted School, to gain Fairtrade School Status.  I was delighted to hear from the Foundation in May that at last we had been successful with our bid. 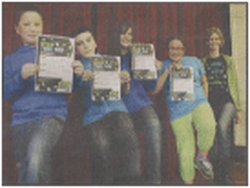 This means that our governors and headteacher have agreed a policy with the student-led steering group to support Fairtrade and learn about Fairtrade Issues at school.  Many teachers have included Fairtrade Issues in their lessons where appropriate.  RE, Citizenship, Economics and Geography have lead the way.  But other subjects such as Maths, English and Food Technology have also embraced the opportunity to use Fairtrade statistics, leaflets or ingredients in their classes.  Students have been selling cakes baked with Fairtrade sugar, chocolate or bananas as well as Dubble Bars created by the Divine Chocolate company  - delicious!   The student run Bluehouse Café sells Fairtrade refreshments on Tuesday afternoons.  We have also been present at local fetes and carnivals to spread the word about Fairtrade products with our wonderful sign designed by students and made and created with the help of parents.

For me a real flagship day was when everyone in the school came in dressed in blue and/or green – the prominent colours of the well-known Fairtrade logo.  That was also matched by the day that Malawian sugar farmer Henry Matende visited the geography department – inspiring and moving.

In some ways our journey has just begun and I look forward next year to seeing more Fairtrade products being used at school – including tea and coffee in the staffroom.  We also hope to link up with Malawian farmers as part of an on-going geography project.  Fairtrade is a real message of hope for us all – that small deeds by each of us can transform the lives of some of the poorest people in the world in a sustainable and effective way.  If we each take a step we can all make a difference.  What Fairtrade step will you take this summer?
Hilary Harber, Teacher Oxted School and
member of the steering group for Tatsfield Fairtrade Village.
Oxted School welcomes a Malawian sugar farmer

For the last two years, teacher Hilary Harber has been working with colleagues to raise awareness by promoting Fairtrade products, encouraging students to learn about Fairtrade issues, as well as having a Fairtrade “steering group” made up largely of Oxted School students.

Mrs Harber, who is an active member of the Tatsfield Fairtrade Village steering group, said “I am thrilled that we were able to welcome Henry Matende into some geography classes.
“This was a special opportunity to hear first-hand about the impact on his life of Fairtrade, which is not a charity but a fairer way of trading.
“It is all about raising awareness and making connections so that when we choose to buy a product we think about the people who grew the raw materials and whether they received a decent wage for their work.
“Fairness matters to us all – choosing Fairtrade is a way to make sure that we each make a positive difference with every £1 we spend.”

Hilary Harber of Tatsfield Village Fairtrade Steering Group was a guest speaker at Lingfield & Dormansland Fairtrade Fayre and AGM together with Atif Choudhury, Director of Zaytoun Palestinian Olive Oil.  It was a truly inspirational evening attended by about 50 supporters.

Hilary, with her teaching hat on, tested the audience’s knowledge of Fairtrade with fair results!
She said that Tatsfield, having achieved Fairtrade Village Status in 2009, continues to raise awareness of the difference that buying Fairtrade products makes to marginalised farmers in the developing world.  Villagers in Tatsfield are familiar with a giant size FAIRTRADE Mark that doubles as a prop for photographs or a game.

Very near to Hilary’s heart is her project of achieving Fairtrade Status for Oxted School.
Young people want to make a difference in the world and the students are enthusiastic and excited about the project. [see below]
The topic of Fairtrade is included in the curriculum, whole school assemblies of 2,000 students take place and events such as sales of cakes made with Fairtrade ingredients are held each term.
The application to become  a Fairtrade School has been submitted and the outcome is now awaited. 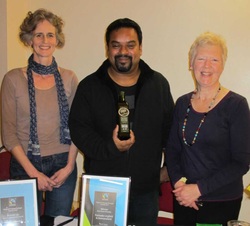 Hilary, Atif & Margaret Vasey (L&D chair)
Atif Choudhury took the audience on an inspired journey from 2004 when he co-founded Zaytoun as a direct response following his visit to Palestine, to 2009 when Zaytoun’s Palestinian olive oil and olives were awarded the FAIRTRADE Mark, the world’s first Fairtrade certified olive oil company.  Since then, Zaytoun has received awards from the Soil Association in 2011, The Times newspaper and the Fairtrade Foundation.

The endeavour had at first been an aspirational idea to support communities whose livelihood is dependent wholly on farming, Atif said. Olive trees provide a connection to land, ancestry and a unified ‘remembering’ of life and loss, a rooted connection that too many of us become sadly detached from.  All people deserve to wish, smile and dream a life just as we do.
He pointed out that Palestinian products had long been available in the UK.  In fact, Queen Victoria had used Palestinian olive soap!
Today, in addition to superb organic Fairtrade olive oil, Zaytoun produces olives, Za’tar herbs, sundried tomatoes, couscous, almonds, Medjoul dates and lovely olive and honey soaps.

Zaytoun olive oil is now available at Linda's Stores. Other Zaytoun products can sometimes be found in supermarkets but are most easily bought online through ﻿Premcrest﻿.

The full story of Zaytoun can be found in this pdf.

Congratulations to the winners 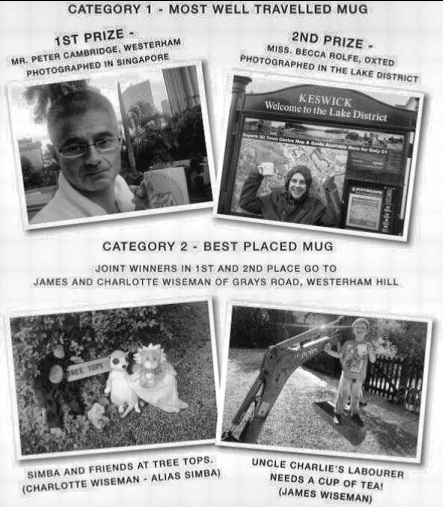 A surprise VIP visitor at the Village Hall Table Top Sale
Continuing the conversation in polite, interested fashion I asked her what her job was at the Foundation. ‘Oh, she replied in a very matter of fact sort of way,’ I’m Harriet Lamb, the Director of the Foundation’