9th INTERNATIONAL FAIRTRADE TOWNS CONFERENCE - BRISTOL 2015
A letter from Barbara Hester
At the beginning of July, 2015 I was lucky enough to spend a weekend in Bristol attending the 9th International Fairtrade Towns Conference.

240 delegates from 20 countries gathered together at the Bristol Science Centre to hear from a range of speakers, attend workshops and learn from each other.  It was an extraordinary privilege to be with delegates from so many countries across Europe, the Lebanon, Japan, Ghana, Columbia, Canada and the US and I realised how proud Tatsfield should be to be a Fairtrade Village.

Garstang in Lancashire became the world’s first Fairtrade Town only 15 years ago and there are now over 1700 Fairtrade Towns worldwide and this year Sweden has become the first sovereign nation to be awarded Fairtrade status. It was a surprise to me to learn that Wales and Scotland are also Fairtrade nations. Tatsfield, was awarded its Fairtrade Village status in 2009.

In order to gain Fairtrade status, a town (or village, borough, county, region) must meet 5 Goals and then build upon them with the status being renewed every 2 years. Groups have to put together Action Plans to demonstrate how they are meeting and developing the Goals. The Goals are whole community focused and Tatsfield is, at present, in the process of renewing its Fairtrade status.

With the UN Sustainable Development Goals being set this month in New York (to replace and build upon the achievements of the 8 Millennium Development Goals, which were set in 2000) the focus of the conference was Fairtrade for Sustainability. Among the speakers we heard from Fatima Ismael, an environmental expert from a Fairtrade Co-operative in Nicaragua, on how climate change is reducing coffee yields and threatening the livelihoods of millions of farmers in developing countries. Harriet Lamb the CEO of Fairtrade International explained how Fairtrade is working with farmers to adapt and mitigate the effects of climate change, as well as employing increasingly sustainable farming methods as part of the Fairtrade standards.

Here in Tatsfield we are lucky enough to have some Fairtrade items on the shelves in Linda’s Stores and you can ask for Fairtrade at The Bakery. Of course you will also see our ‘Tea Tent’ outside the shops a couple of times a year with free Fairtrade tea and coffee and tray-bakes to sample as well as goods to buy. But don’t expect us to be stopping there - until we are able, one day, to say ‘Hej då fattigdom!’ which is Swedish for ‘Goodbye to Poverty!’
​ 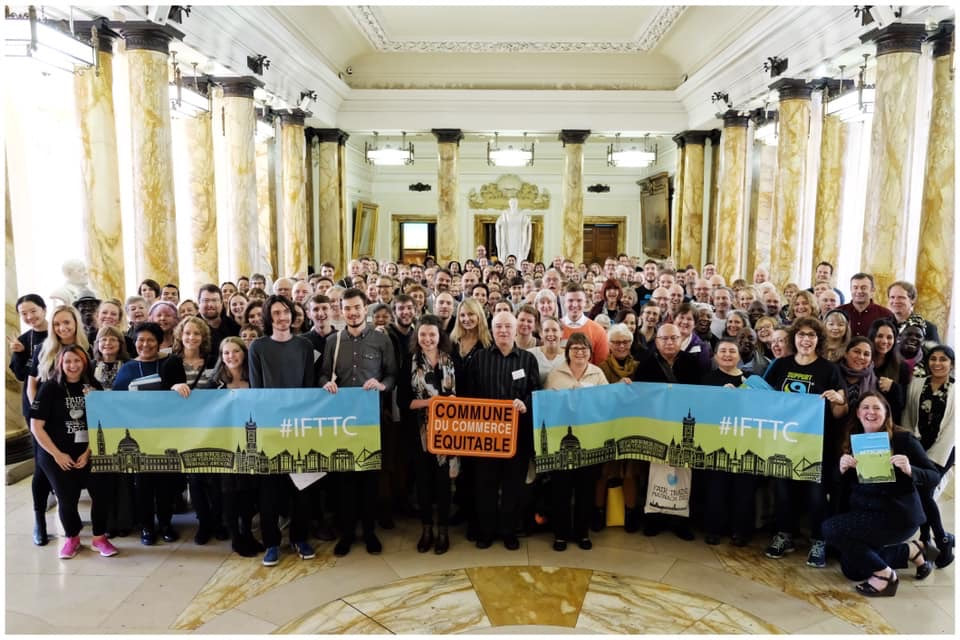 I was again lucky enough to join over 250 people from 41 countries attending the conference whose theme was The Future of Fair Trade.  Taking place over the middle weekend in October, it featured lively panel discussions on 'The Future of Fair Trade' and'The Future of Global Trade & Trade Justice' and engaging workshops on subjects such as Living Incomes, Town Linking, Engaging young people and Climate Change.

On the Friday evening a Welcome Dinner  was held in the Senedd,  home of the Welsh Parliament.  The speaker was Sophie Howe, the Future Generations Commissioner on 'How Fair Trade helps us to be globally responsible'.

The Saturday evening was given over to a celebration of 25 years of the Fairtrade Mark with a dinner and time for socialising held in the Temple of Peace.

It was again such a joy and privilege to meet so many people from around the world with such passion for Fair Trade and to join together to celebrate 25 years of the Fairtrade Mark.